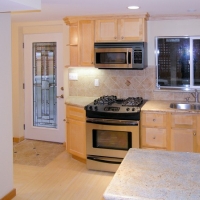 What are secondary units?

They are considered self-contained residential units consisting of kitchen and bathroom facilities within a dwelling or within a structures accessory to dwellings such as above Laneway garages etc.

ALL LEGAL SECONDARY UNITS WILL HAVE TO ABIDE WITH ANY APPLICABLE LAWS AND STANDARDS [ETC. BUILDING CODE, FIRE CODE AND PROPERTY STANDARDS BYLAWS]

Up unit January 2012 most cities, towns and villages did not approve of any existing units.  In other words their local government did not allow for or approve of any such units.

The Provincial Government has made changes to the Planning Act.  The Strong Communities through Affordable Housing Act, 2011 amended various sections of the Planning Act to assist in the creation of second units by:

The effective Date for Second Units and Impact on Official Plan Policies for all municipalities came into effect on January 1, 2012.

For further details visit the Ministry of Municipal Affairs and Housing: Click Here